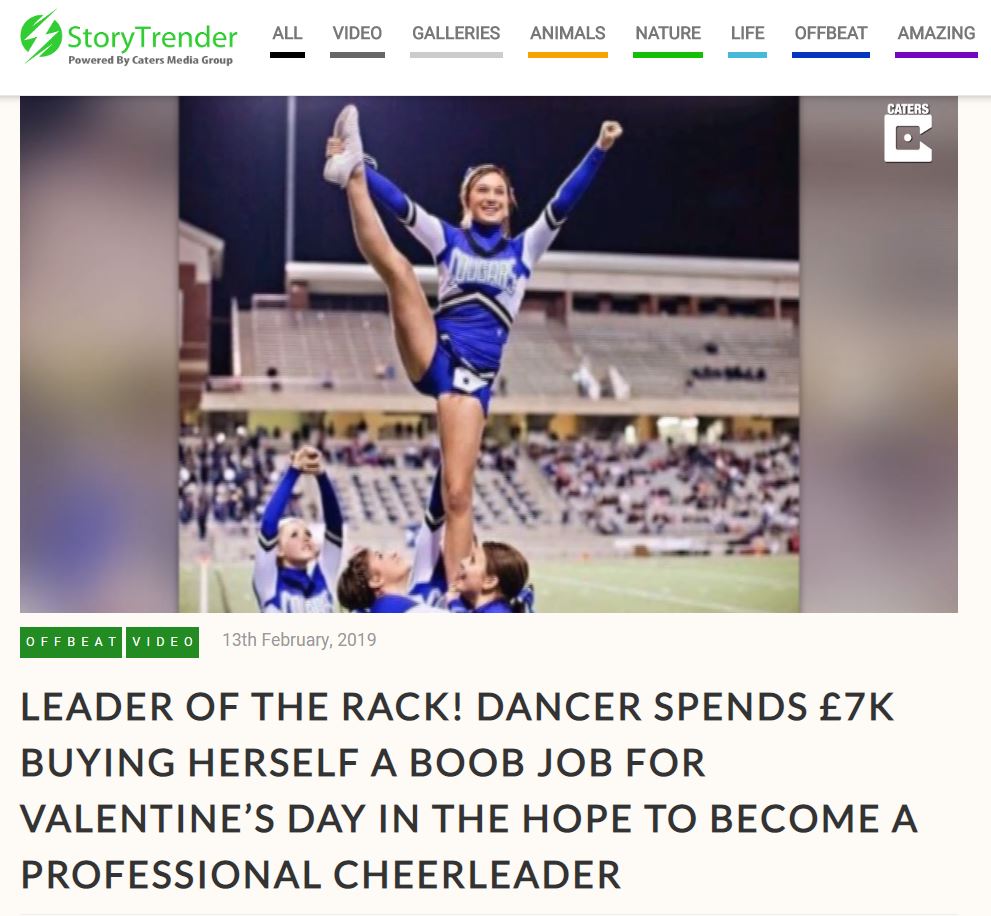 Using a technique he has perfected, Dr. Rose had Taylor ready to get back in the game with a quick recovery from her breast implant surgery in less than a week’s time. Read Taylor’s story watch the videos and see before and after breast augmentation photos as featured on StoryTrender! http://www.storytrender.com/85893/leader-of-the-rack-dancer-spends-7k-buying-herself-a-boob-job-for-valentines-day-in-the-hope-to-become-a-professional-cheerleader

See her before and after photo below only THREE DAYS after surgery!

LEADER OF THE RACK! HOUSTON CHEERLEADER GETS BREAST AUGMENTATION FOR UPCOMING APRIL AUDITIONS

She decided to have the operation with Dr. Franklin Rose, after noticing she had lost a lot of weight from her breasts after losing weight.

“After college, I lost a whole lot of weight, which I also lost from my breasts.

“Anyone knows when working out that as you get lean and have a lower body fat percentage it’s hard to keep big boobs.

“When I was bigger I had big boobs but was self-conscious about my weight, then I lost the one thing about my body that I liked.

“I have always been insecure about it but didn’t want to go through surgery, but with the try-outs coming up it gave me a push.

“My confidence will be extremely high, which will show in my tryouts and overall in my performance to the judges.

“I’ll finally feel comfortable in my own skin and the number of different tops I can wear.

“It will change every aspect of the way I look, feel, and my overall confidence.

Taylor has been passionate about dancing since she was five years old, taking classes in ballet, jazz, hip-hop, contemporary and other forms.

While cheerleading she feels free and finds it a perfect way to clear her head. She longed to go to professional tryouts since the age of 18 but never previously had the confidence to do it.

Taylor said: “I have always danced and done cheer, I wanted to try out since I was 18, but now my age is forcing me to overcome my fear and do it “I like the adrenaline rush of dancing is the one thing that can help me block everything out and not think about anything else.

“I tend to be in my head a lot, so dancing is a release and cheer is certainly a passion of mine.”

Taylor believes part of what held her back was her appearance. After starting to exercise five times and becoming a vegetarian to help her drop to 9st 9lbs she finally began to feel confident enough to try out.

The only thing holding her back was insecurity, but now since the implants, she believes she will be dancing more vivaciously than before.

And since going from a B-cup to a small D-cup, she can’t wait to flaunt her new figure in two-pieces and bikinis, with her already having two vacations planned.

Taylor said: “I knew if I was going to stay as small as I am, I would need to undergo surgery to be at a cup size I’m comfortable with.

“I would feel more insecure when wearing certain tops or bathing suits, it’s especially important to be comfortable wearing a two-piece to become a cheerleader.

“It’s a confidence thing, it will definitely help me feel better, not only for the tryouts but in all aspects of my life.

“I will be very happy with it, it’s a big change but a good change.”

Taylor had the one-hour-and-15-minute breast augmentation with Dr. Franklin Rose of Utopia Plastic Surgery and Medspa.

Rose, who has performed more than 6,000 silicone and saline-gel breast implant procedures, says “For many women, breast implants are something they secretly desire but are hesitant to take the plunge and get them,” Rose said. “In many cases, it’s the fulfillment of a lifelong dream.”