Cindi Rose is back from New York where she just attended the premiere of a documentary on plastic surgery in America in which daughter Erica Rose has a lead role. 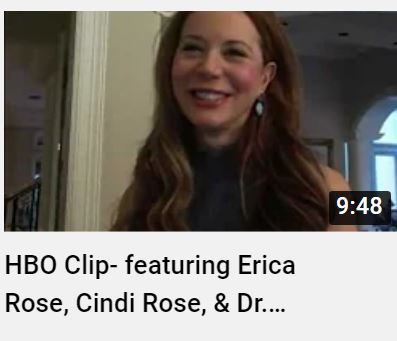 Watch a clip of the movie https://youtu.be/ckoA3Y5s3e8

Cindi also has her moments of fame in the film produced by their pal, a Harvard film school grad whose dad happens to be a plastic surgeon. It premiered at Walter Reade Theater in Lincoln Center as part of the Film Society of Lincoln Center’s Independents Night.

But wait, there’s more. Dr. Franklin Rose is scheduled to shed his light on plastic surgery on the small screen — on Dr. Phil Friday in a program titled Teens: Pressure To Be Pretty. The Roses plan to celebrate Franklin’s media moment with a reviewing party that begins at his Utopia Med Spa at 3 p.m. and continues into the night at the Uptown Park locale.

With people out of work, the economy in a slump, and competition for jobs at a premium, is staying visibly younger the solution to surviving in the contemporary job market? This is one of many explanations offered for the American obsession with staying young, presented in the documentary film.
Filmmaker Mitch follows several story threads in her film. As the director and producer, she embarks on a two-year cross-country examination of the anti-aging industry—a $60 billion per year market. It isn’t all LA and New York centric. One of the main characters profiled is 53 year-old Sherry, a Dallas resident. She connected by responding to a Craigslist ad asking, “Want to talk to a documentary about your thoughts on aging?” We see her in her initial interview, lamenting that she is no longer “getting the catcalls” as she walks down the street. After Restylane, a breast job, and a tummy tuck—for $35,000 “cash up front.” She relates, “I feel like I’ve been born again. I have a new life.”
Her father was a plastic surgeon. We see home movies of she and her brother playing monkey-in-the-middle with a silicon breast implant. At 10 years old, she accompanied her father on his rounds at Michigan’s largest hospital, where he served as the Chief of Plastic Surgery. She is the keeper of his extensive photographic repository of “before and after” shots of patients. Although he was killed in a 1998 automobile crash, his presence is pervasive throughout the narrative. He is an example of a plastic surgeon that his daughter sees as “making people happy.” She believes that he had seen his fill of death while serving in Vietnam for a year as a trauma doctor and orthopedic surgeon and references his efforts with correcting children’s cleft palates, mastectomy reconstruction, and post-accident correction—as much as his rejuvenation work. Her father never criticized his daughter’s appearance, and he serves as a model for the relatively good old days—before Botox became big on the scene.
Pushing 40 during the course of the film, fighting her own demons about aging, prevalent since she bought her first jar of anti-aging cream at 13–Part of her anxiety is rooted in her realization that “women become increasingly invisible as they age, while it is just different for men.”

I wanted to make a film that really provoked thought even if at times it angered the viewer.

When she began the project in 2006, she was “pretty against elective plastic surgery, and anything that pierced the skin.” Throughout her interviews (over 200 completed by phone, e-mail, and on camera), the audience wonders which way her inclinations will tilt. We follow her comparing wrinkles and shadows with a friend from her teenage years, and watch as she videotapes herself daily after the purchase of a $400 wrinkle cream—as she looks for signs of improvement. She resists being pulled into the giddy comradery of a New York City “Botox Meetup Group” that she finds on the Internet. This scene includes a dentist observing the procedure, as he plans to add revenue to his practice through offering Botox injections. The viewer is informed that anyone with a medical degree is credentialed to administer Botox.

…the search for the fountain of youth is one of the oldest themes. Ultimately, it explores the idea of eternal youth and never wanting to die.

Issues of job security, health insurance, and fear of aging are all mixed up in the equation. searching for answers from others—as well as from within. She admits that while making the film, her perspective has changed. While questioning the evolving cultural norms on how we “perceive physical aging” and the marketplace that has sprung up to cater to these concerns, she remains non-judgmental of those who agree to speak with her.
On the surgery side, Dr. Franklin Rose, a top practitioner based in Houston, displays an unctuous manner and luxurious lifestyle. (It is noted that ‘fewer and fewer” doctors want to become internists, given that primary care physicians and pediatricians make a fraction of what plastic surgeons earn.) He presents a clear foil to the warmth and genuineness of her father.
Throughout the film, women and men (perhaps the most gruesome footage is of a man’s $12,000 hair transplant procedure) moving into late middle age are juxtaposed with twenty-somethings who declare anything over 28 as “old.” One 26-year old gets Botox “because her forehead is a nightmare.”
Living longer, working longer, dating later in life. Is plastic surgery the answer to ageism? Mixed in with the revelations of, “I’m scared of not having the money to keep looking younger,” and the fears of “being alone and losing what you used to have,” is the oft-repeated phrase from those interviewed of needing to retain their “self-esteem.”
In watching Make Me Young, those questioning their desire to turn back the clock will realize that they are not alone. Others, looking for a definitive pro or con point of view, will have to settle for ambiguity…and look to themselves for resolution.
Read the whole story as featured on HuffPo: https://www.huffingtonpost.com/marcia-g-yerman/make-me-young-youth-knows_b_779078.html

When did you first know you wanted to make this movie?

Well, I’ve always been a bit obsessed with aging. I’ve been making personal films for a long time, since I started making documentaries in college. When I was younger, my interest had more to do with the passing of time. But when my dad died when I was twenty-seven, I found myself becoming aware of certain things.
My father was a trauma surgeon before entering the field of plastic surgery, and at the beginning of his career did mostly reconstructive procedures like post-cancer breast reconstruction. At that time there was no Botox or implants or injectables. Plastic surgery wasn’t accessible to the middle class. It was much more secretive. It’s a very different world now, not just with Botox but with things that fill in wrinkles and plump up your cheeks and lips. So as I entered my early thirties, it was hard to not be aware of this booming industry, and be curious about looking into my father’s work.

One of the questions the film asks is: what makes people happy?

One of the doctors in the film sites a study that says it’s not money or looks that makes people happy. It’s self esteem. And what blocks people from having good self esteem is something about their appearance that gets in the way, whether it’s anxiety about hair loss or weight or their nose. And often, if they can do something about it, they feel a lot better.
I know a very normal guy who used to be cover up his nose. For years he didn’t like it and finally he went away quietly and got it fixed, and then he didn’t cover it up anymore. There are different cases, obviously, and for some it can become an endless pit where no amount of weight loss or surgery will make them feel better. But for many, it gives them what they need to restore their sense of self- esteem.

What do you hope audiences will take away from the film?

To me the stealth message of the film is: wouldn’t it be great if we lived in a society where there wasn’t ageism, where the sexes were completely equal? But because the world is the way it is and things like weight and ageism do exist, I feel like it’s not fair to judge those who have made a decision to fight a really hard fight against those things. I wanted to make a film that really provoked thought even if at times it angered the viewer.
Ironically, I don’t like to wear makeup, and I don’t care that much about beauty. I think my fascination with youth is more time related.
One of the people I interviewed who didn’t make it into the final film said something that really interested me. I asked the question, why do you do Botox? And she said, “Because when I look in the mirror, I just feel like there’s more time to get things done.” That was very revealing because I did not want this to be a film about women whining or about ageism. I wanted to make it more universal and to kind of turn the subject on its head, which I think I was able to achieve.