Houston Plastic Surgeon Dr. Franklin Rose has developed an innovative set of procedures we call a “Stem-cell enhanced facelift” using the patient’s own tissues which can result in faster healing while restoring lost volume to the face and neck areas. His specific techniques utilize a 3 layer technique to address the aging face and neck to create a more youthful look. It is a combination of the new SMAS facelift that addresses three layers of tissue (unlike older methods that just pulled tight the top layer of skin alone), along with the patient’s own harvested fat-rich cells (via liposuction) and plasma to enhance this technique.

HOUSTON, Texas via ABC
https://abc13.com/health/stem-cells-from-patients-own-fat-make-the-facelift-new-again/1857112/
For many people of a certain age, we feel we can spot a facelift a block away and so for many years we’ve opted to go the non-surgical route when it comes to reversing the signs of aging. Yet, now both men and women are choosing to go under the knife with a technique that promises more subtle changes that can last for decades.
Most people would look at 48-year-old Indya Rydman and think she looks years younger than what’s on her driver’s license. However, when she looked in the mirror, she saw something else. “I see the gradual sagging,” Rydman said, fussing at the reflection looking back at her.
“You see, she has a lot of looseness under here and we’re just going touch up a little bit around the eyes,” said Houston Plastic Surgeon Dr. Franklin Rose as he examined Rydman a week before her surgery.
“I’m actually doing this for myself because when I look in the mirror, I see what I want to fix,” Rydman said.
With a job in public relations, Rydman said, “My smile and my face is the first thing people see so it’s the most important part of my body.”
What they both saw were the effects of weight gained and lost while having kids, along with a genetic predisposition to hooded eyelids and the effects of gravity around Rydman’s jaw. Until now she had gone the non-surgical route with fillers to achieve the look of her younger days. Wanting a more permanent solution, she turned to Dr. Rose at his Houston-based Utopia Plastic Surgery and Medical Spa and his three-layer stem cell enhanced facelift in Houston.
“So the three layers are gently defatting, sometimes grafting with stem cell enhanced fat that we’re doing for her and then, of course, tightening up,” said Dr. Rose.
The goal is to create a more natural-looking facelift.
“We’ve all seen facelifts of yesteryear where the patients are just pulled so tightly, it looks like kind of a wind tunnel. It doesn’t look pretty,” said Dr. Rose.
The newer facelifts he’s doing on his patients in Houston use smaller incisions and plump stem cells from a patient’s own fat, all making for a less painful and much shorter recovery. With incisions above and below her eyes, below her chin, in her hairline, and in front and behind her ears, it’s the safe and natural filler found in Rydman’s own body that is the key to the rejuvenation.
“I love the results. They’re very natural and soft and I’m really excited. This stem cell facelift is supposed to last 15 to 20 years,” Rydman said.
Good candidates for the three-layer facelift can range in age from the early ’30s to those in their ’80s, depending on a patient’s skin. As for price, the procedure rings up around $15,000. 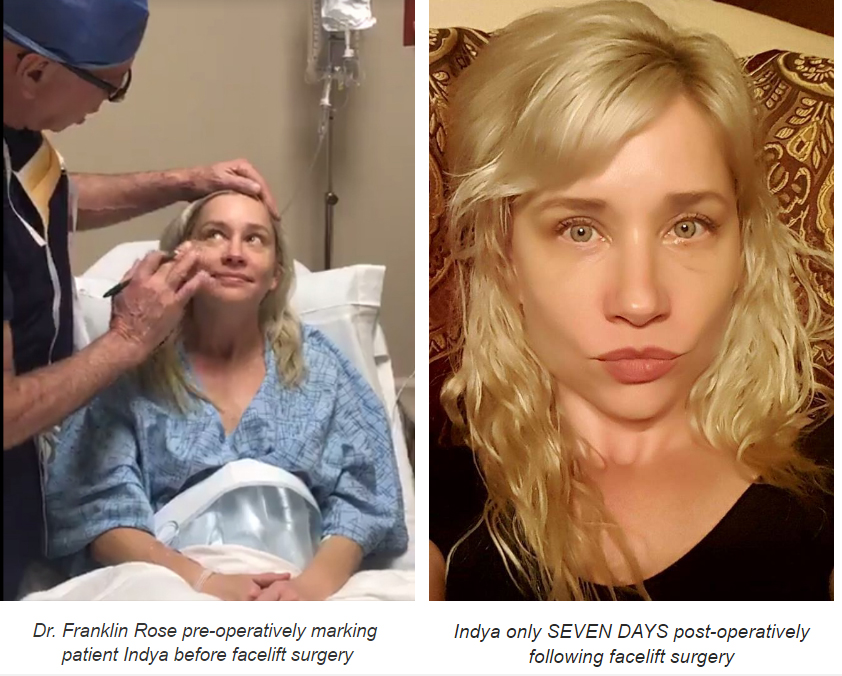 THE SCIENCE: This innovative use of growth-factor enriched techniques has the potential to revolutionize traditional facelift surgery. Plastic Surgeon Franklin A. Rose, MD has been both studying and implementing this European technique to harness the powerful characteristics of plasma cells to increase the facial rejuvenation benefits of fat grafting for over ten years. Growth-factor enriched stem cells from PRP can increase the survival rate of fat transfer, which can be long-lasting and often permanent.

Researchers have been exploring the regenerative properties of growth factors alongside platelet-rich plasma (PRP) for years, experimenting with their potential to aid in anti-aging treatments.