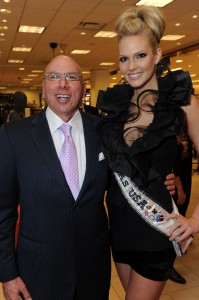 Celebrity Plastic Surgeon Dr. Franklin Rose and Cindi Rose joined forces with entertainment publicist Karen Steele to put on their star studded Red Carpet Party to benefit the The Holly Rose Ribbon Foundation.
Established in 2005 by Houston Plastic Surgeon Dr. Franklin Rose and philanthropist and silhouette artist Cindi Harwood Rose the Rose Ribbon Foundation aims to improve the emotional health of those with critical illness by providing free reconstruction to both uninsured and under-insured individuals of all ages and both sexes. Yearly, twelve to fifteen people receive free breast reconstruction from the Rose Ribbon Foundation. All the money donated goes directly to the patients, including their total hospital cost, all nurses, medicines and other doctors. Recently, the foundation has included non- human hair wigs, comfortable robes, pillows, permanent eyebrows and psychological support to those with critical sickness.
Several years ago, Cindi Rose’s sister, Holly Harwood Skolkin, was diagnosed with breast cancer and told she had three months to live. After learning of their sister’s illness and that more than 45 million Americans are without health insurance, Dr. Franklin Rose and Cindi Rose made it their mission to help those in need. The Rose Ribbon Foundation is a non-profit charity organization 501 (c) (3), soon to be re-named the Holly Rose Ribbon Foundation.

Special Thanks to our Wonderful Chairs, Sponsors, & Hosts: